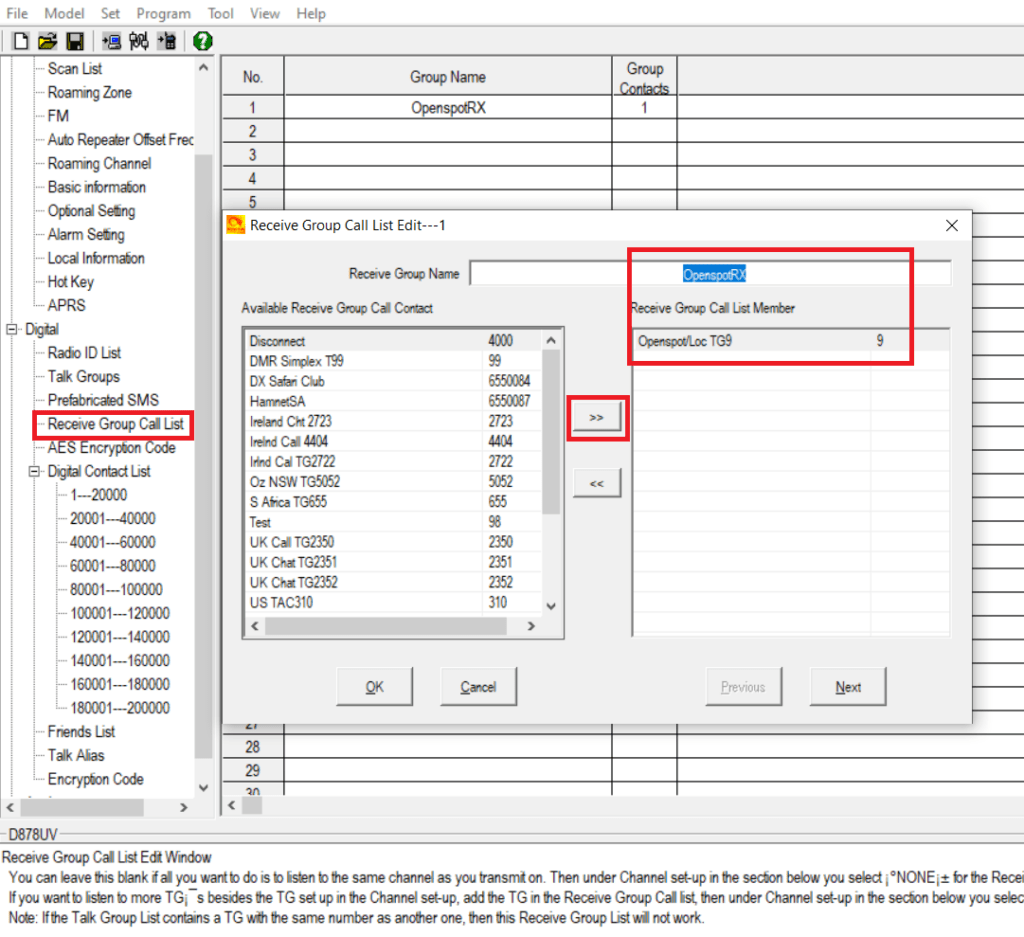 Although the Anytone radio has built in DMR capability via any nearby DMR repeaters the situation often arises that if you are inside the house, or further away from a repeater and you cannot reach the DMR repeater, you cannot connect to the repeater from the radio. Or it could be that your local DMR repeater is very busy on two talk groups, and you want to use a third one. All these situations can justify the use of a hotspot via the Internet.

There are certainly much cheaper alternatives to the openSPOT (like the Pi-Star, TGIF Spot, RFinder HCP-1, etc – good video comparing top choices at https://odysee.com/@hamradio2dot0:6/best-ham-radio-hotspot-for-early-2021:b?r=A7MvvHF3JLvcGpn8umRYnJ1oybsg3cse), but they generally don’t have built-in batteries, or are much bulkier with protruding antennas, or don’t have the full cross-mode functionality that the openSPOT3 has. So although the tips below work for me with the openSPOT3 they may well be of use with other hotspots too.

You really need to decide whether you’re going to use the radio with a single channel programmed to the hotspot and just manual dial any private or public talk groups, OR setup a bunch of channels to use with the hotspot and just change between them to do what you want to do. Although you can do both methods I found it confusing at times when I had set a manual dial, and later wanted to talk, only to find the manual dial still connecting instead to something different. Maybe it’s just me, but always best to keep it simple when starting out and just stick to either/or rather than mixing methods.

Requires at least one channel setup on a simplex frequency equal to the modem setting on the openSPOT with TG9 set as its default both ways (because the openSPOT is sending on TG9 (universally a ‘local’ talk group) which includes voice announcements. The Anytone programming software has a section for adding Digital Talk Groups and here you can add one called ‘openSPOT Local’ set for TG9. There is also a section called Receiver RX List where I added just one item called openSpotRX and set to TG9 (this is just a talk group channel that you have already created, listed on left side in the image below, and which you select to appear in the Receive Group Call List). So your single channel would select both of these, and you can name the channel something like openSPOT Talk. By default, colour code 1 and slot 1 are used. 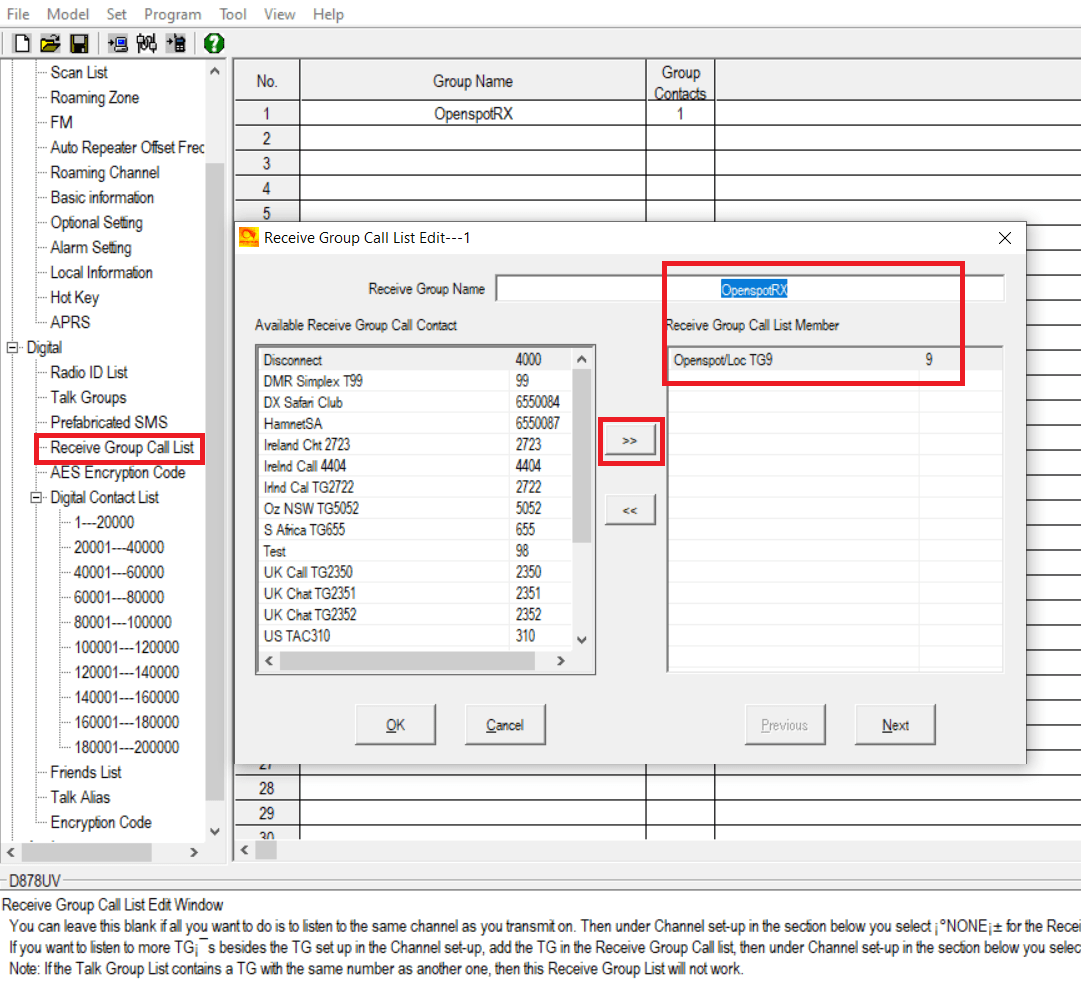 To dial manually, you can long press the 0 key and then either enter the private DMR ID directly, or you can press the # key and then enter any public talk group ID such as 91, and then kerchunk (quick press of the microphone) to set it. It is probably advisable to do a quick disconnect before changing to another talk group, and this entails using private ID 4000, and after the kerchunk, you enter the public TG and kerchunk to execute it.

This approach builds on the manual method above, but adds more talk groups and programs a channel to handle each one. So we’ll stick with the single Digital Receiver RX that was set to TG9, but under Digital Talk Groups you go ahead and add the ones you expect to use, along with a few extra private talk groups to get information back from the openSPOT. When you add the actual channels then you will select the Talk Group that corresponds to each one. Note the Group Call (Public TG) vs Private Call option for each one created. The openSPOT will actually respond to public or private talk group commands, but I just prefer to set its local hotspot status commands as Private. 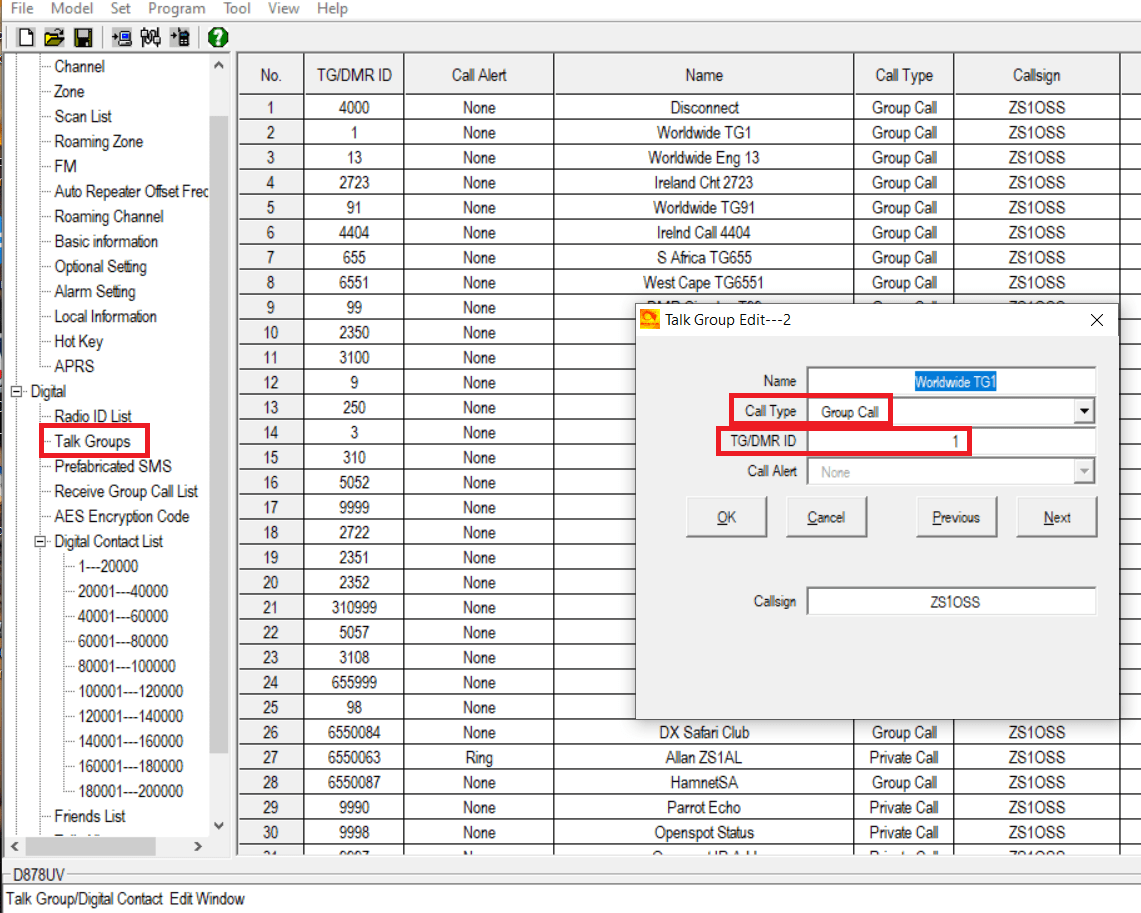 So for example one channel to add is one called say ‘openSpot World’ which will the add TG91 as the contact. Keep the Receiver RX group set to the one created for the openSPOT. The transmit power can be set to low as you only need to reach your own hotspot. In my case I also added another channel called ‘openSPOT SA TG655’ which had talk group 655 set as the contact – this will be to talk countrywide in South Africa. I also have channels set for our Hamnet talk group. 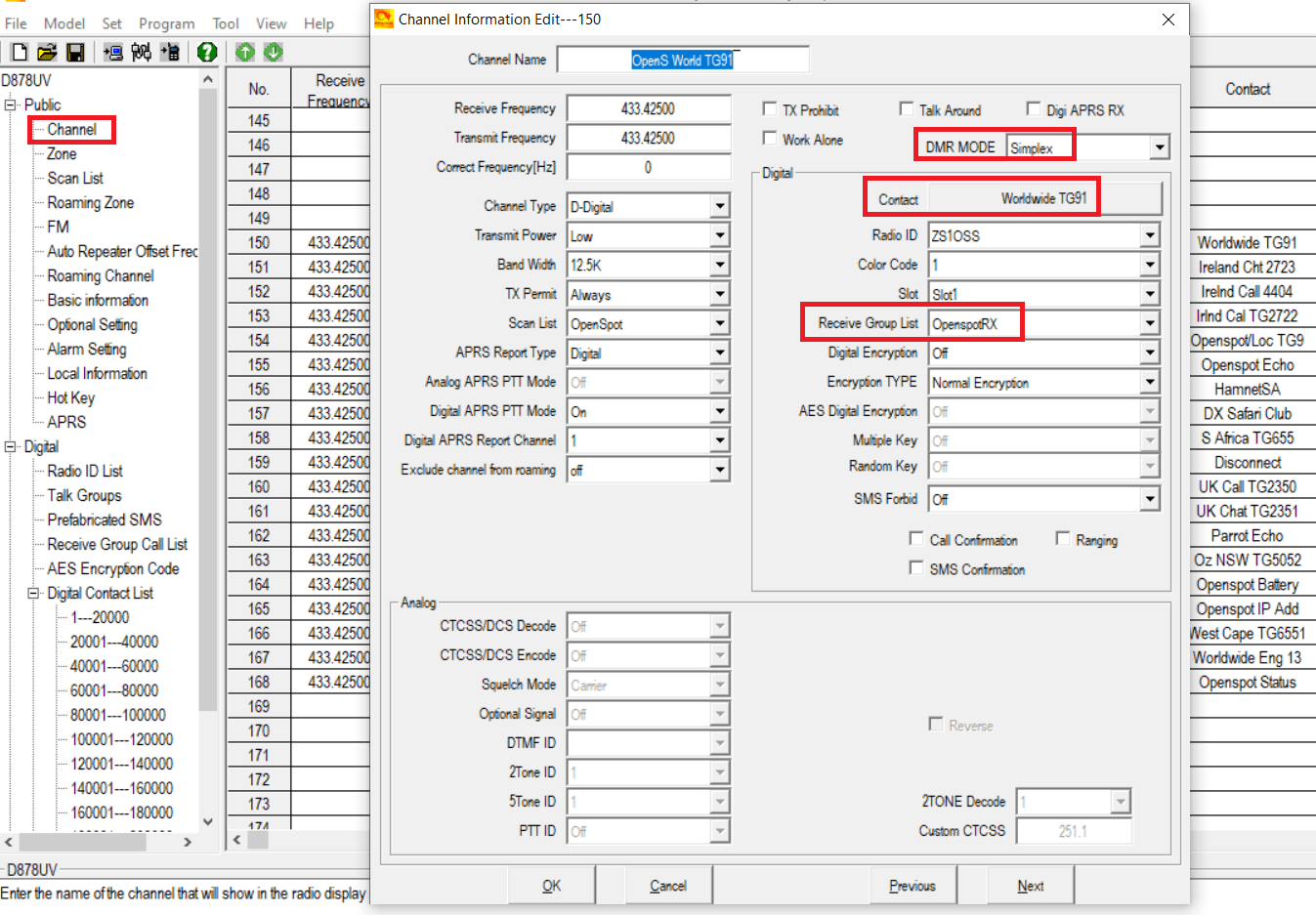 The other type of channels you want to add are a few for status commands for the openSPOT.  These will generally be private groups, but you’ll link the channel contact to the corresponding group, and name it accordingly too. I have set the following ones: 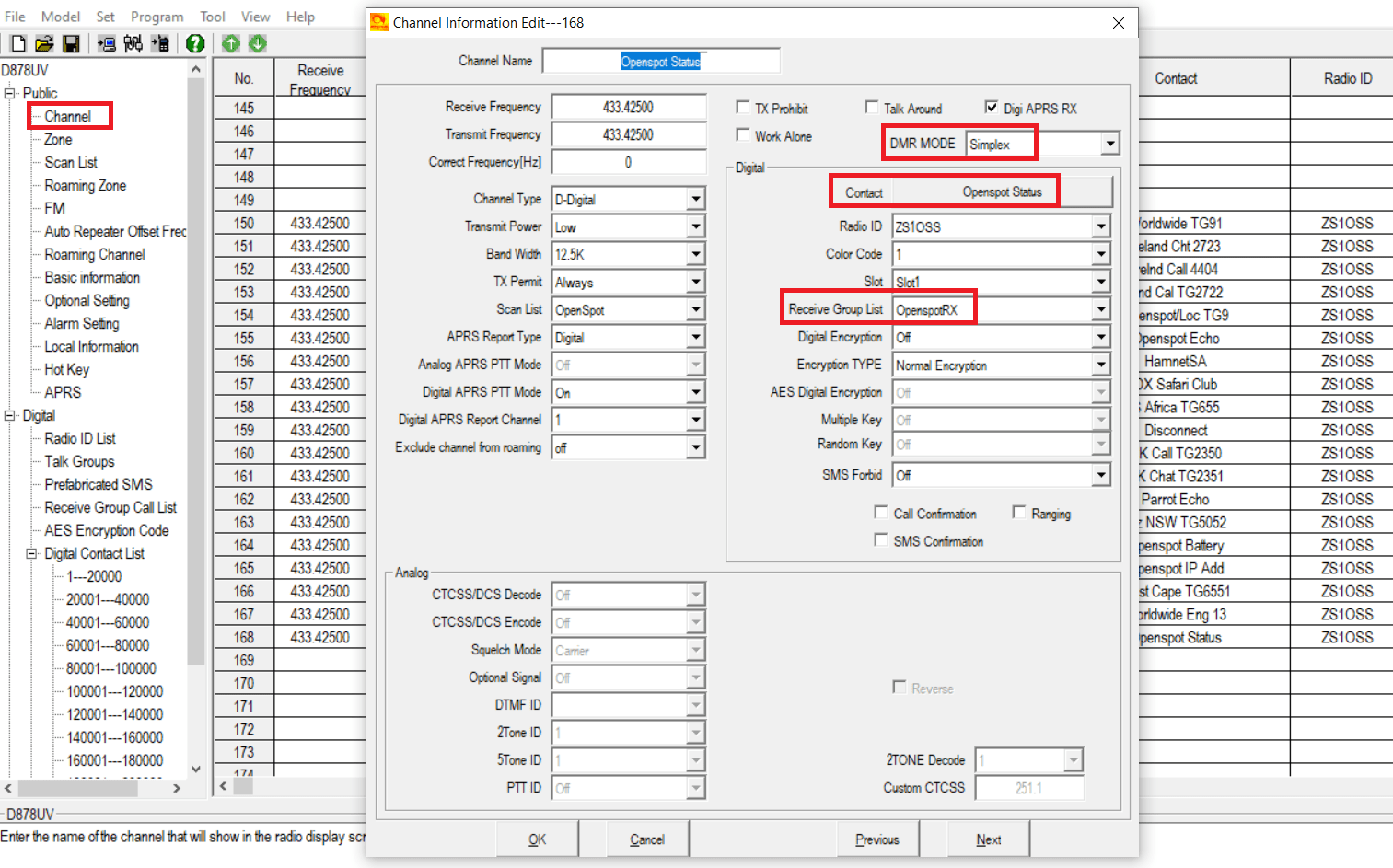 Now you should have a couple of channels created. Don’t worry too much about the sort order as you can set that in the Zone section. 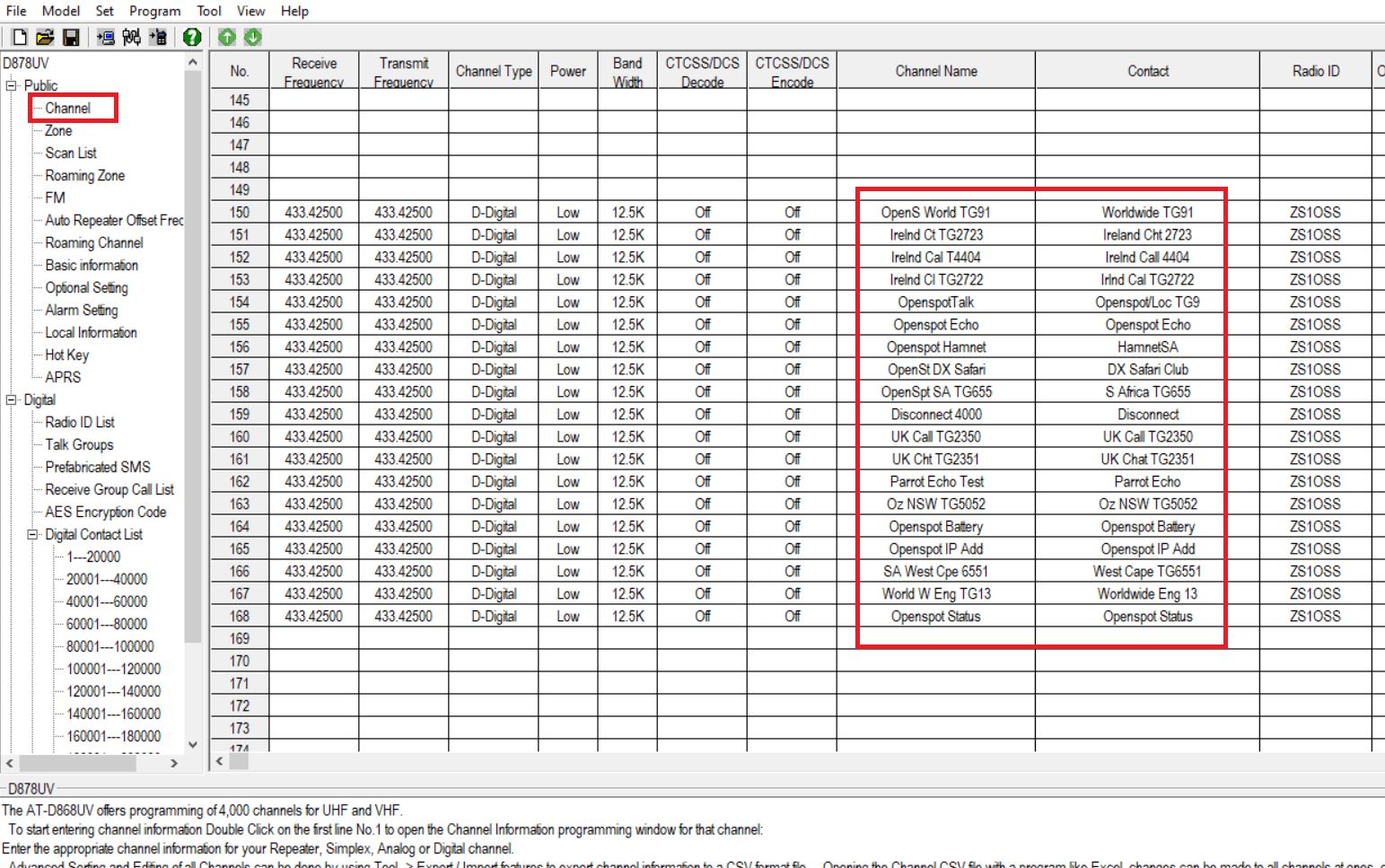 Key thing above is that the Channel Name essentially corresponds to the set Contact (these complete the Talk Groups you first created). At this point these channels won’t actually show up on the Anytone so you want to create a Zone (call it ‘openSpot’) and add the created channels to the Zone, and then you can use the Up and Down buttons to change the order that they will appear in on the radio. 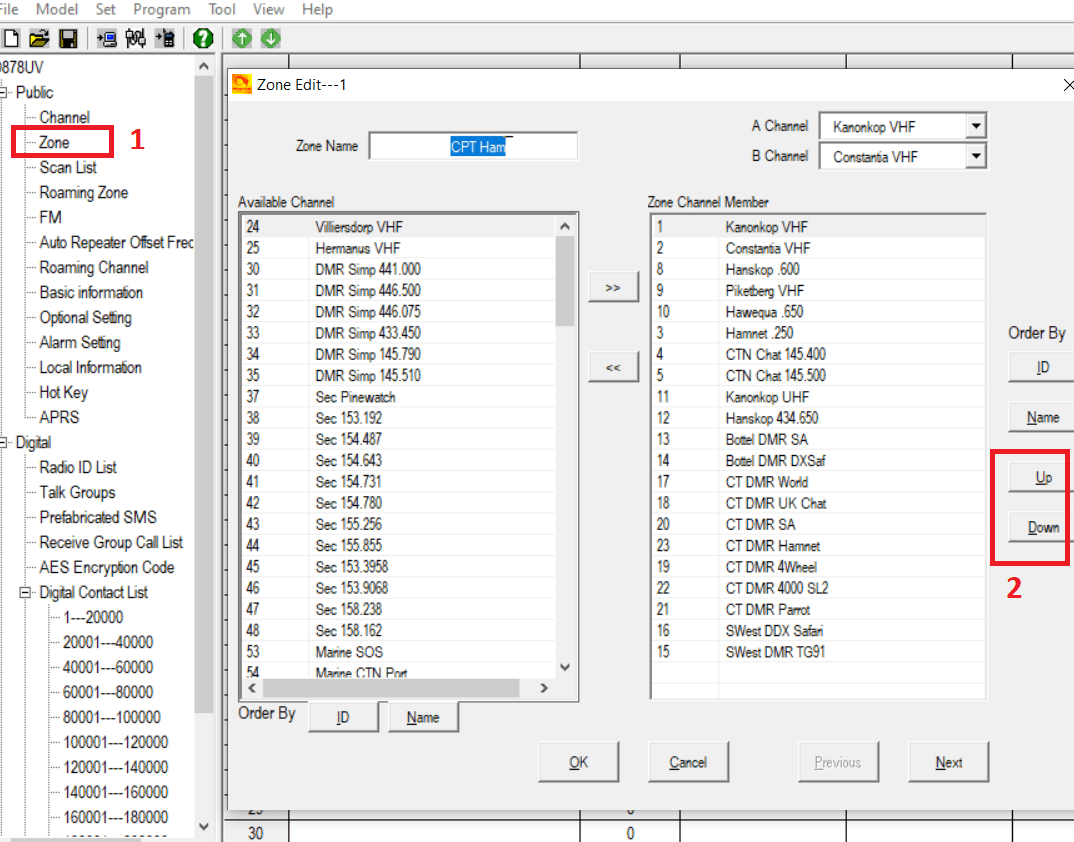 Now you save the codeplug and flash it to the radio. To use it, go to the openSPOT Zone, now you will be able to turn the radio’s channel knob on top, to switch between the channels. Typical use will be:

However, you can confirm it is working by visiting the Brandmeister page with a web browser.  Make sure you go to the Selfcare page, and at the bottom left you’ll see My hotspots. Click on that link, and it will show a page which shows static Talk Groups at the bottom. You should see your auto-static Talk Group on the right-hand side (see image below) and if you hover over it with the mouse it should show a tooltip stating it is an auto-static Talk Group. Once a message comes through, or you key up again, on that Talk Group, it should show again on the hotspot status. 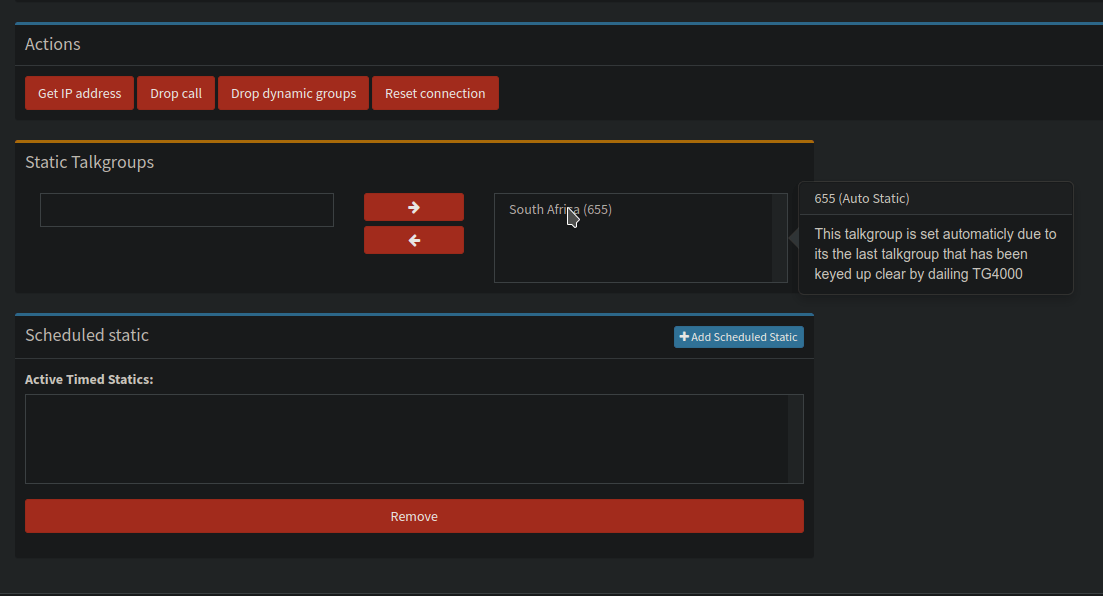 Using the Anytone with DMR Repeaters

DMR Talk Groups in Use in South Africa

Generally timeslot 2 is used on the radio repeaters for these talk groups, but this is not relevant when hotspots or computer/mobile apps are used.