Whilst the free version of Trello has some really nice features along with the slickest GUI on the desktop as well as mobile, what if you want a securely in-house hosted and scalable alternative? One thing you have to accept is you're not quite going to get that same interface especially when it comes to mobile, but there is still rich functionality to be found in alternative products.

The two strongest contenders I found based on similarity of looks and features, as well as ease of installation, were Wekan and Kanboard. KanbanFlow was a strong contender but is similar to Trello in terms of free/priced model and was not open source, and Rastyaboard was another strong contender but is more open core, and needs a request to get it. Both of these contenders had good mobile app support though.

But I was looking for freedom, ease of installation, and features such as mobile access/app, checklists/subtasks, horizontal swimlanes, filters, recurring/repeating tasks, relations between tasks, attachments, activity history, import from Trello and CSV/JSON, Gantt, group assignments, voting, and custom fields. I am looking for it to be used in an office and not for dedicated agile development etc (Taiga is better for that).

The long and short of it though is that Kanboard wins hands down on depth and breadth of functionality (IMHO). It has numerous extra plugins that extend its functionality even further (like adding instant chat, theming, voting, and notifications to external messaging services such as Telegram, Slack, Mattermost, Rocketchat, Zulip, Signal, and more). It has an Android app. Some other nice touches are optional RSS feeds and iCal feeds (latter for inclusion in a remote calendar) for projects and very powerful rules that can be set up (change card colours, notifications, roles, etc that can be triggered by card movements as well as time). It can even restrict a role to just creating and editing cards in a single column/list. Kanboard has way more functionality around due dates than Wekan has, and its notifications extend past just e-mail to Slack, Telegram, Signal and a few other services.

Kanboard has categories with colours (Wekan calls them labels) and columns (where Wekan calls them lists). Already when creating a card on Kanboard you'll notice extra features such as the ability to assign to a group, a priority, original estimate hours, time spent, complexity and a reference field. But on editing a card the standard click on a Kanboard card opens a new detailed page full of options for the card - if you want to do a high-level basic card edit without leaving the board you need to click on the top left of the card and then on the drop-down menu and click 'Edit the Task' (Wekan defaults to the easy edit option). In Kanboard you won't find checklists in the basic task edit screen and you'll need to go to the detailed card/task view. Kanboard only has subtasks (no checklists as well as subtasks) but each subtask can have its own owner, estimated time and due date set. A timer can run separately for each task, and they can optionally be migrated to their own card task. It also has an option to create an automatic re-occurrence (repeats) of a card (based on closure or movement to another column/list with basic rules to set a new action date).

Kanboard's linkages to another existing task (internal link) allow relationships such as relates to, is blocked by, duplicate of, child of, parent of, milestone of, is fixed by (and custom ones can be added). It will search for cards on the current board or other boards. Kanboard can sort cards by due date and also has an advanced filter (with an editable assumption for cards without a due date). It also has a pre-built list of typical queries around due dates (like overdue), tasks not assigned, as well as by person and category. Advanced search has a more informative help and can include parameters like creation date, completion date range, recently modified (useful to see who is updating or not), by tag, reference field, by colour, etc. Custom search filters can be created and shared with all project team members.

Kanboard's views are easily seen and selected from the horizontal menu above the tasks and choices are Overview, Board (columns), List (tabular list), Gantt, and Calendar.

For status updates, Kanboard has very nice functionality to e-mail task details straight out, or to convert a list of all open tasks with details to a PDF file. It also has an analytics view with charts showing task distribution, user repartition, cumulative flow diagram, burndown chart, lead and cycle time, and estimated vs actual time (of course you need to be actively using the timer functions then). There is also a plugin that shows a diagram view of task relationships but I'm seeing a blank image (as some others have reported) so need to sort that out.

With Wekan as the other option, the UI is really much slicker and on par with Trello. It has checklists (for some reason you can have multiple named checklists) as well as subtasks (creates separate cards for them but pulls through no progress status) per card. Wekan's multi-selection feature will filter by label, assignee or manual selection, and will carry out move or archiving actions. Wekan also has an advanced filter which you can enter conditions into but it is not easy for a novice and I could not even get it to filter on 'due date'.

Wekan's views will rotate through card list view, swimlanes, and calendar views. One odd thing about its calendar view is if a card has no end date it won't show in the calendar (so you may have to consider using end date as the due date otherwise it won't show there). Wekan has rules that will trigger on cards added to list/swimlane, moved to/from/archived, and on labels for added or removed, members added or removed, attachments added or removed, checklists added or removed or completed (even for specific items or named checklists). The actions that can be triggered include moving a card to top/bottom of a list, archiving a card, adding a swimlane, creating a new card in a list (could create a new duplicate as a conditional repeating task), add/removing a label, add/remove a member, set colour of card, add a checklist, check off all items on checklist, add checklist with defined items, send an e-mail.

Both allow named colour labels and the attachment of documents and images (latter can be chosen to appear in the card itself as a cover image, so an urgent image can be used as a sticker). Wekan will allow multiple labels per card (Kanboard only one but Kanboard could use groups) and can copy a named checklist to multiple other cards. Wekan also allows the whole card to easily have a colour set for its background. Both allow for markdown editing and the addition of multiple custom fields per card.

Regarding Trello imports, again Wekan is the slickest one with the option offered straight up as you create a new project. Wekan imported everything very well including task status updates, colours, dates, etc and even offered to map Trello team members to members in Wekan. With Kanboard there were two options one of which was an offline script with Trello API details etc required (it created a project with columns but I could not see any tasks), and the second easier option was a 3rd party plugin called TrelloJSON2Kanboard (to use it then go to My Dashboard view and top right of the menu bar is 'Import Trello JSON' which also did a good job but did not offer to map to existing members if I recall correctly).

The mobile side is a bit dismal... out of the two Kanboard has an Android app (crashes on my Android Q phone and on my tablet it only wanted an https address and I'd not set up SSL yet). Both render on mobile though but one worry with Wekan is that it is too easy when clicking to select the project that you click on "archive project" and it disappears, and when in the board view if you don't touch sharply on a column it tends to slide that columns order (not serious, but bit messy). That said Wekan does render the card view nicely and moving the card is fairly easy via the menu (neither supports drag-and-drop in mobile view but Wekan will let you drag a card up and down within the same list). Kanboard shows an "all columns" view of cards but moving a card is a bit trickier as Kanboard's complex menus make it a bit more difficult. It's basic card edit (via drop-down menu is OK but again not as good GUI as Wekan) and its full card edit is "busy"... Wekan definitely wins on a better mobile browser experience. I do need to test the Kanboard mobile app properly though and it looks like Wekan is working on publishing apps.

This overview does no real justice to either application but certainly, with Kanboard the depth of features boggles the mind. If you want something lighter and very Trello like then Wekan could be the option but if you are a data junky, want to ensure lots more detail and are not a fan of pretty material design then Kanboard could be your option. Neither are suited to heavy mobile app usage from what I can see - Wekan is reasonably usable, and Kanboard's Android app still needs to be tested by they have no iOS app.

I'll post screenshots and video screencasts at my photo site at photos.gadgeteer.co.za/index.p… 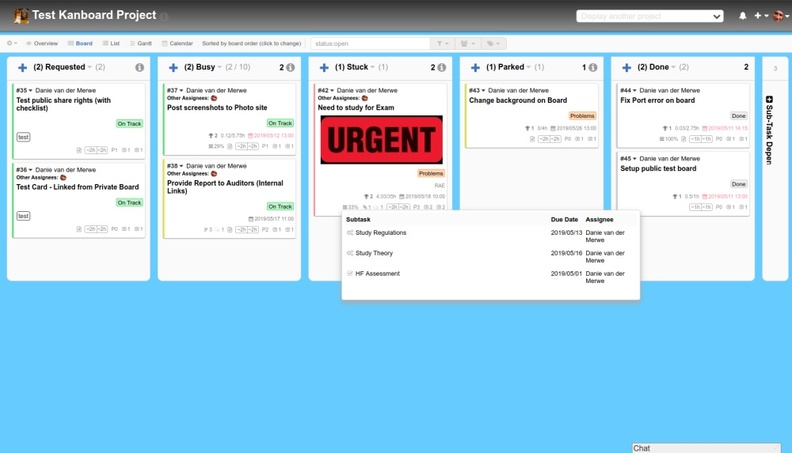