Skip to content
Latest Posts
Lotus 123 for Linux is like a Digital Treasure Hunt – Back then no Office Suites or GUI interfaces
The Big Fat Lie of the Fat-Free Food Movement, thanks to Advertising by the Dairy Industry
Deepfake attacks can easily trick 9 out of 10 live facial recognition systems online, fooling even ‘liveness tests’
Mojo Vision’s next iteration AR smart contact lenses with Eye-Tracking is demoed to CNET
Spinlaunch Throws A Camera Toward Space With Electric Power – Good For Launching Small Satellites 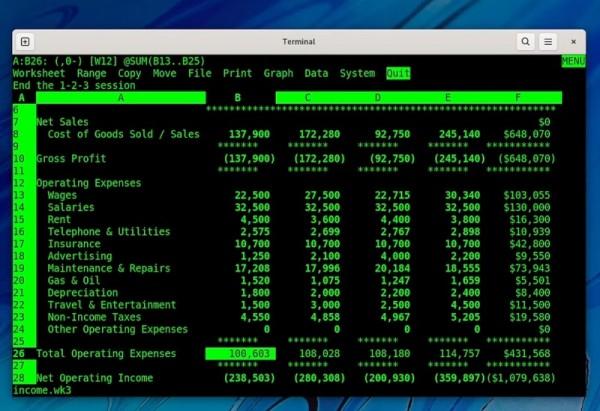 Ever hear of Lotus 123? It is an old spreadsheet program that dominated the early PC market, taking the crown from incumbent Visicalc. Tavis Ormandy has managed to get the old software running natively under Linux — quite a feat for software that is around 40 years old and was meant for a different operating system. You can see the results in glorious green text on a black screen in the video below.

This really brings back memories of my first job in IT doing desktop support. We purchased and used a wordprocessor, spreadsheet, database app, etc all separately. They worked on ASCII based monochrome monitors before we had graphical interfaces with drop-down menus operated with a mouse. They were actually quicker to use with keyboard shortcuts, than trying to use a mouse (which only came later). The big problem though was as you switched packages there was no consistency in the use of keyboard shortcuts yet.

We used Samna and WordStar for early wordprocessing, and Lotus 123 was long used as a spreadsheet package. This also gave the ability to sort and calculate data, and create basic ‘databases’. Then we all progressed to WordPerfect, which also migrated into an early graphical interface, and we saw office suites start to appear. And only then came Microsoft Word…