I love riding on heritage steam railways when I can and always used to think it was an hour or two job to just light the fire and do a few basics. But there is a lot more to it than that as this 37 min video shows.

A step-by-step video, with descriptions, on how to fire up a coal-burning steam locomotive. The entire 6 - 7 hour process was shortened down to ~37 minutes in this video to highlight most of the main points.

The locomotive seen in the video is Denver and Rio Grande Western (D&RGW) mikado (2-8-2) #491, one of the largest narrow gauge locomotives ever created. It now runs at the Colorado Railroad Museum in Golden, Colorado. It has ~37,100 pounds of tractive effort, and weighs ~150 tons or ~302,000 pounds. It was built in 1928 by the D&RGW Burnham shops in Denver, Colorado using the boiler off of a standard gauge D&RGW 2-8-0. #491 is a pristine example of a locomotive perfectly suited for rugged, mountain climbing work. 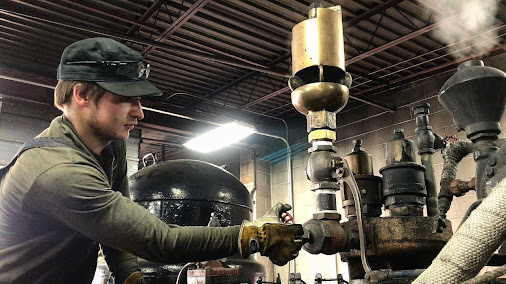