"Hewlett Packard introduced their HP 35 in 1972. It was the world's first scientific calculator. It could be considered a little geeky in that it forced the user to learn a data entry system known as Reverse Polish Notation (RPN), which was closer to the way the internal computer chip handled the process. What thousands of scientists and engineers discovered, however, was that this data entry system was closer to the way their brains processed the problems too. RPN is addictive. If any serious science or math student asks my recommendation on a calculator, RPN is it. The HP 35s was issued on the 35th anniversary of the original HP 35."

I cut my own teeth with RPN back in 1983 with my HP41CV when I studied engineering (I still have this calculator and it still operates). RPN becomes more and more advantageous as the calculations become complex. The video below attempts to explain this. Once the theory is understood you rarely even require more than two or three of the stacks. RPN is actually a very efficient way of calculating.

So considering that... do today's school learners actually learn RPN at all?

Watch the RPN explanation at https://www.youtube.com/watch?v=cPKg_JtI-Ys 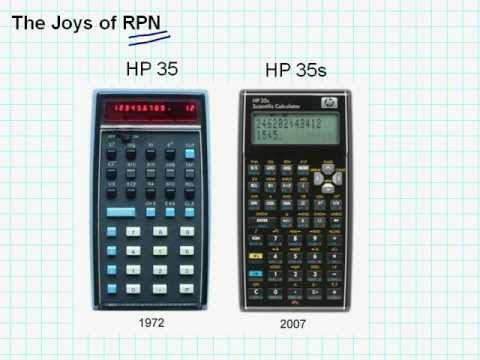