The Pro Range is aimed toward the serious train simulation enthusiast looking for a complex machine to master. Each product is designed to provide education and entertainment for users. Xbox controller and HUD interface support do not come as standard and users will need to read the accompanying documentation to fully understand the operation of this advanced simulation.

A total of 842 “Black Five” locomotives were built for the London, Midland and Scottish and later British Railways; and, a truly definitive add-on is unleashed, in the form of Partner Programme developer Bossman Games’ fantastic LMS Stanier Class 5!

What became one of the more memorable locomotives in British rail history starts its story in the early 1930s, when William Stanier, Chief Mechanical Engineer of the London, Midland and Scottish Railway (LMS), sought to design a new and suitably powerful mixed-traffic locomotive. In his early LMS days, Stanier used his engineering skills which he acquired while working for GWR, however steadily refining and honing his own unique style of locomotive.

When the LMS needed more powerful traction, Stanier’s response was equivalent to the GWR’s Hall Class, a 4-6-0 with a rating of 5 for passenger, and 5 for freight – the Stanier Class 5.

Originally the Class 5 fleet was known as “Black Stanier”, in contrast to the “Red Stanier” Jubilee Class; however, when ‘5’ was seen adorned on the cab side from 1940 onwards, a new “Black Five” name befell the fleet.

The do-anything attitude of the Black Five saw their popularity rise with both crews and enthusiasts alike – it could turn up almost anywhere, get the job done, and look good while doing it – the fleet of 842 was a familiar sight right up until the end of steam.

The Black Fives were sadly scrapped in droves, but an impressive 18 were saved for use on both preservation railways and mainline railtours, and the preserved fleet has a history of ‘acting’ by means of temporary alternative numbers to revive lost members of the class.

The video below gives a good idea of the detail that this steam loco addon provides. The loco sounds were recorded from 45407 on the mainline, and 45379 at the Mid-Hants Railway.

Watch the video at https://youtu.be/Srtti2gGJrc 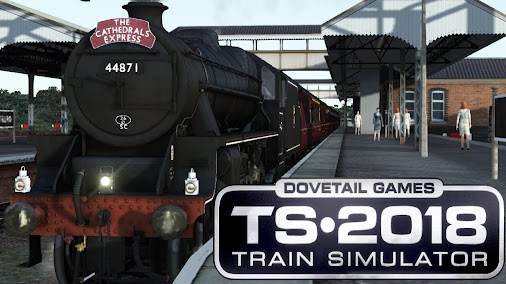