Skip to content
Latest Posts
How to use Android’s AirDrop-like Nearby Share feature – Get started with Google’s AirDrop alternative
This Hidden Apple Setting Makes You Sound So Much Better on Video Calls – Can Only be Accessed Whilst in a Call
Why You Should Use an existing embedded eSIM Card the Next Time You Travel
The Return of Gopher: Pre-web hypertext service is still around
Lotus 123 for Linux is like a Digital Treasure Hunt – Back then no Office Suites or GUI interfaces 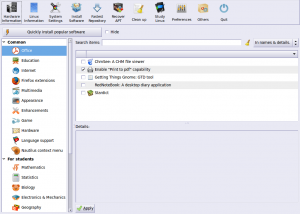 This page is mainly based on making Ubuntu and Linux Mint easier to use (by the way from mid-2017 I moved to Manjaro KDE), prettier to use, avoiding common installation errors, etc. Ubuntu and Linux Mint are both free desktop operating systems that are very stable, do full multitasking, startup and shutdown in seconds, make legacy hardware perform like new, and have tons of free software applications that install at the click of a mouse. Linux Mint is based on Ubuntu and works with all Ubuntu software – it has numerous enhancements over Ubuntu and is more similar to MS Windows for first-time users. According to DistroWatch Ubuntu is the world’s most popular Linux distro with Linux Mint following closely behind. This page is not intended to duplicate my FOSS software page but rather to complement it.  Although installing both Ubuntu and Linux Mint is now just as easy as installing MS Windows, there are still some minor tips that can help one in cases where things get stuck.  Although these desktop operating systems are free it is considered good etiquette to make donations via Paypal to aid the development project.